For the pod: the Gospel in the post-modern world

This message called The Supremacy of God and the Gospel in a Post-modern world is an important and helpful one. We are living in a different world- the trouble is most of us have not realised it. An ignorance of the gospel of grace and its contextualisation is having its impact. Yes, some things like Alpha are effective (it gets a mention from Keller) but even it is not doing particularly well when it comes to engaging the un-churched.

To most people in our society, Christianity is religion and moralism. The only alternative to it (besides some other world religion) is pluralistic secularism. But from the beginning it was not so. Christianity was recognized as atertium quid, something else entirely.
The crucial point here is that, in general, religiously observant people were offended by Jesus, but those estranged from religious and moral observance were intrigued and attracted to him. We see this throughout the New Testament accounts of Jesus’s life. In every case where Jesus meets a religious person and a sexual outcast (as in Luke 7) or a religious person and a racial outcast (as in John 3-4) or a religious person and a political outcast (as in Luke 19), the outcast is the one who connects with Jesus and the elder-brother type does not. Jesus says to the respectable religious leaders ‘the tax collectors and the prostitutes enter the kingdom before you’ (Matthew 21:31).
Jesus’s teaching consistently attracted the irreligious while offending the Bible-believing, religious people of his day. However, in the main, our churches today do not have this effect. The kind of outsiders Jesus attracted are not attracted to contemporary churches, even our most avant-garde ones. We tend to draw conservative, buttoned-down, moralistic people. The licentious and liberated or the broken and marginal avoid church. That can only mean one thing. If the preaching of our ministers and the practice of our parishioners do not have the same effect on people that Jesus had, then we must not be declaring the same message that Jesus did. If our churches aren’t appealing to younger brothers, they must be more full of elder brothers than we’d like to think.
From Daily Keller on Twitter 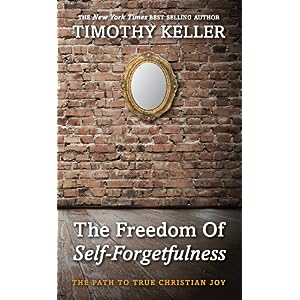 If you are connected in any way with thinking about the gospel in our days get a pen and paper and take a few notes on this one. It's one to listen to twice.

By the way, Keller's new book called The Freedom of Self-forgetfulness
Posted by David Cooke at 9:46 AM